The Window
That Never Was 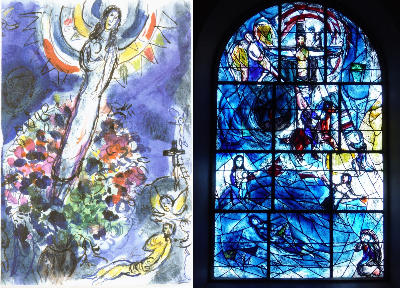 In 2009 a picture previously unknown to Tudeley was identified in the collection of Ida Chagall in the Centre Pompidou.

An ink and watercolour gouache design, it showed a young woman surrounded by a wonderful bouquet of flowers. Surviving members of the d’Avigdor-Goldsmid family were unaware of its existence, but despite a tentative dating to 1975, it was in fact clearly an early design for Tudeley’s east window.

The two designs have many compositional elements in common. The swirling halo form that appears around the head of the girl surrounds the head of Christ in the finished window. The black teardrop shape to the left of the cross is almost unchanged.

The cross and ladder which make the central form of the finished window appear in the early version, much less prominent on the right hand side. The grieving figure at bottom right is common to both, though much more fully developed in the final version. The recumbent yellow figure in the draft reappears, reversed, revised and in blue, as the image of the drowning girl.

Why was this design never used? It is impossible to be sure. Perhaps Chagall thought better of giving the dead girl such prominence, and chose instead to feature Christ.

But we can only speculate on what might have been had this design gone forward instead of the one we know so well.