Tudeley has had a church since the beginning of the seventh century - it was one of only four in the Weald at that time. The earliest parts of today's church are the sandstone footings of the nave and tower, which date from before the Norman conquest. It is mentioned in the Domesday Book under Tivedale - one of its many name variants:

"Richard de Tonbridge holds TIVEDALE of the bishop of Bayeux. It is assessed at 1 yoke. There is land for 1 plough, and it is there on the demesne and a church, and woodland (to render) 2 swine..."

A list of incumbents hanging in the church begins in 1251, but most of the structure that can be seen today is from the 18th century. The brick tower dates from around 1765, as does the delicately marbled ceiling; the North aisle was added in 1871. 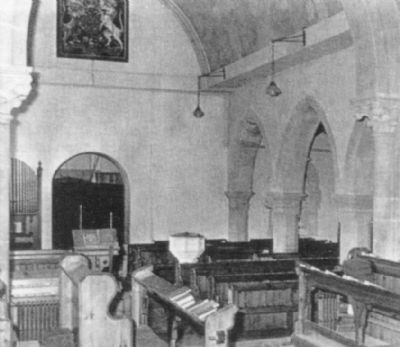 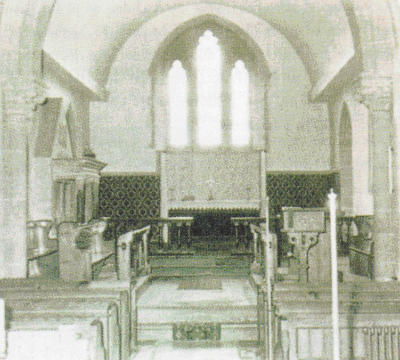 The church before its re-ordering in 1966

The church was substantially re-ordered in 1966, the dark pews and choir stalls being replaced by the light ash ones we see today. The ancient heating system was replaced by an underfloor one, relieving the interior of much ironmongery. At the same time, the east window aperture was remodelled, providing a most suitable space for Chagall's east window.

The windows were installed between 1967 and 1985; the east window was followed by the five north windows and two south ones, dedicated in 1974. The four chancel windows were the subject of some controversy, as installing them meant removing Victorian memorial glass. In 1985, however, the last four  Chagall windows were dedicated, their Victorian predecessors being relocated to backlit boxes in the vestry. 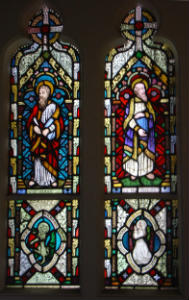 Victorian windows displayed in the vestry

The single manual organ, handbuilt in the style of Father Smith, was dedicated in 1990; its carved casing features Kentish hops and acorns. In 2006 the underfloor heating was replaced at a cost of over £100,000, raised from local contributions, donations from well-wishers and charitable trusts. The font was relocated to its present position in the north aisle, and a ramp for wheelchairs installed at the chancel step.

An outer porch door of engraved glass was added (to preserve some of that expensive heat!) in memory of James Teacher (1937-2003). The former cart shed has been restored and fitted out as a small hall, named in honour of local composer Arnold Cooke. The car park has been extended and exterior lighting added; other projects are ongoing.

Extensive roof repairs were carried out to the church in early 2017 after much fundraising, individual donations, a substantial grant from the Listed Places of Worship Roof fund and a donation from the Wolfson Foundation.

The internal walls to the chancel were also seriously damaged by water ingress and were repaired in the Autumn of 2017.