History of the windows

All Saints’ Tudeley is the only church in the world* to have all its twelve windows decorated by the great Russian artist Marc Chagall.

The east window at Tudeley is a memorial tribute to Sarah d'Avigdor-Goldsmid who died aged just 21 in a sailing accident off Rye. Sarah was the daughter of Sir Henry and Lady d'Avigdor-Goldsmid; the family then lived at the fine Jacobean house Somerhill (now a school) which is situated nearby. 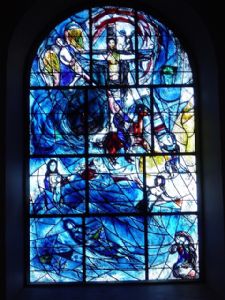 Chagall came to stained glass work relatively late in his long career.  Some of his finest work in the medium is at the synagogue of the Hadassah Medical Centre in Jerusalem, depicting the Twelve Tribes of Israel - the Reuben window, in particular, prefiguring the east window at Tudeley.

Sarah d'Avigdor-Goldsmid had shown an early interest in contemporary art, and had bought the first picture that David Hockney ever sold, snapping it up at his student show.

Sarah and her mother saw the designs for the Hadassah windows at an exhibition at the Louvre in Paris in 1961, and were enthralled by them.  After Sarah's death in 1963, Sir Henry and Lady d'Avigdor-Goldsmid commissioned Chagall to design the magnificent east window.

In commemorating the daughter of a Jewish father and an Anglican mother Chagall was an inspired choice. He was a Russian Jew, but one who often included Christ in his work, and who spoke of him as "the radiant young man in whom young people delight".

Chagall was initially reluctant to take on the commission, but was eventually persuaded - and when in 1967 he arrived for the installation of the east window and saw the church, he said, 'It's magnificent. I will do them all.'

And over the next 15 years, Chagall designed all the remaining eleven windows, collaborating as usual with glassworker Charles Marq of Reims.

The chancel windows were finally installed in 1985, the year of Chagall's death at the age of 98 (replacing Victorian glass, now cunningly backlit by a specially designed lightbox installed in the vestry, at the suggestion of Sir Hugh Casson).

The Tudeley windows are inspired, said Chagall, by the words of Psalm 8, especially verses 4-8:

"What is man that you are mindful of him, the son of man that you care for him?  You made him a little lower than the heavenly beings and crowned him with glory and honor.
You made him ruler over the works of your hands; you put everything under his feet: all flocks and herds, and the beasts of the field, the birds of the air, and the fish of the sea, all that swim the paths of the seas."

The only other Chagall glass in Britain is a window at Chichester Cathedral, which is based on the theme of Psalm 150: 'Let everything that hath breath praise the Lord'.

Dr Jonathan Sacks, then Chief Rabbi, in his preface to Chagall Glass at Chichester and Tudeley (edited by Prof Paul Foster and available from All Saints' Church or from Chichester Cathedral bookshop) wrote:

"The concept that Art can add spirituality is something that goes to the core of all religions ...

[Marc Chagall's stained glass] can but serve to enhance the spirituality of the beautiful surroundings in which they are placed, advance the fervour with which the Almighty is worshipped, and increase the devotion of those coming under the inspiration of Chagall's divinely-inspired talent."

One of the wonders of the Tudeley windows is that they are at eye level: one can go right up to them and see the marks of Chagall's hands. He would scratch and mark his windows right up to the final stage of making - some say even after they were installed. This distinguishes the Tudeley windows from most of his other stained glass, which tends to be high up and hard to see (although Sarrebourg is another exception).

* Despite some claims to the contrary, Tudeley really IS the only church in the world to have all its windows decorated by Chagall. The other contenders are the Hadassah Medical Centre in Jerusalem - but this is of course not a church, but a synagogue - and Le Saillant, Limousin, France, which is a chapel.
Locations of Marc Chagall's stained glass around the world. (Adobe PDF format).